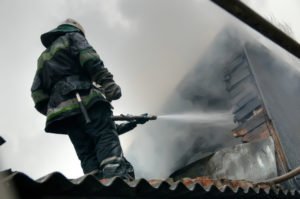 In our latest case, Wheeler, DiUlio, & Barnabei faced an uphill battle against a landlord who was refusing to admit responsibility for a major loss that occurred in one of their properties, resulting in devastating damages to a local small business. When all seemed lost, a shocking turn of events ultimately turned this case into a major win for our clients.

Our client was a commercial tenant in Shamong, NJ. Their company made lotions, perfumes, and other skincare products, and the business owners had set up shop in a space rented from Jem Erectors.

During their tenancy, a fire started in the property, ultimately leading to damages so severe that our clients had no other choice but to permanently close their business. It seemed like things couldn’t get any worse…until the landlord began claiming that the fire was the result of our clients’ negligence in caring for a single light fixture.

Experts determined that the blaze began in a light fixture. The light was a fluorescent fixture, permanently installed in the office area of the building. The Defendant handed over stacks of reports, and we scheduled countless depositions, experts, and motions in our quest to get to the bottom of what happened on that fateful day and prove that our clients were not to blame.

Unfortunately, the Defendant was now claiming that the fire originated in one of Plaintiff’s cooking vats that was allegedly left on over the weekend. So a battle began over what truly was the cause of the fire, this vat, or the light that was installed by the landlord? Just when it seemed like we were at an impasse, we took another look at our reports and noticed a very important piece of the puzzle was missing. On one photograph out of thousands produced by the Defendant in this case, there was a small line which referenced a report…a report that the Defendant did not provide. This is not only incredibly unethical, but it is absolutely not allowed. During discovery, all requested reports are required to be handed over in full. The omission of this document was a very clear attempt to cover up the truth behind the real cause of the fire.

We discovered that the Defense attorney had brought in another expert to provide a report, and to leave out the fact that the expert had reviewed this hidden report. As we continued to dig, we found out that the Defendant’s insurance company had hired an fire cause and origin expert to determine the cause of the fire and draft an initial report. In this report, the Defendant’s expert clearly stated that the fire started because of arching in the electrical system of the light. In other words, the fire started due to the Defendant’s negligence in maintaining the electrical system in its commercial property. But during discovery, all mention of this report had been scrubbed by the Defendant’s attorney.

If it weren’t for a thorough and painstaking review of the file, this important report never would have been discovered. It’s that attention to detail and refusal to give up that puts Wheeler, DiUlio, & Barnabei a cut above the rest.

Finally, it came time to start trial. On the morning that the trial was set to start, the Judge held a settlement conference, where we were able to get the Defendant to agree to pay a settlement of $1,000,000.00. Needless to say, this was a huge win for our clients, who had already been through more than they should have and were finally given the justice they deserved.

If you’ve suffered a loss at the hands of someone else, and they tell you it’s “not their fault,” don’t just sit back and accept it. Dig deeper and make sure you’re not just dealing with someone looking to take advantage of your vulnerability all for the sake of saving a buck. Even if your claim has been denied by an insurance company, yours or another persons, you owe it to yourself – and your business – to get a second opinion. Contact Wheeler, DiUlio, & Barnabei. We’re here to help.